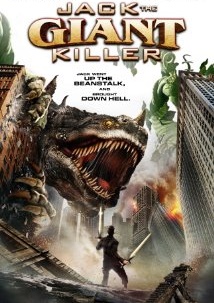 A giant beanstalk brings Jack to a land in the clouds filled with snarling, evil beasts. When the creatures make their way to the ground, Jack must figure out how to get back down before they destroy earth and everyone in it.

Where do I start? Some movies ARE so bad they're good. I love cheesy movies and was in stitches for most of such classics as 'Killer Clowns from Outer Space', Megashark vs Giant Octopus', and 'Robot Jox'. This I did not love. It was annoying. I'm just not entirely sure why this was simply bad and not cheesy.

Awful acting, Awful plot (in fact, practically none), poor casting, poor direction, bad special effects. Actually, they weren't ALL bad - maybe the production was taken over seriously. Nope, that can't be it as it's already been pointed out the costumes and props were from entirely different time periods (CCTV cameras on walls anyone?)

I think it was simply a lack of care about any single part of the filmmaking process. It's like someone just stood in the street, shouted 'Who wants to make a film that's very loosely based on Jack and the Beanstalk', and the least interested people within earshot all inexplicably volunteered.